We are pleased to introduce our first husband and wife duo, Raymond and Michelle Ng – as our Beet It Sport Malaysia Ambassadors for January 2018!

Raymond and Michelle are trail runners and both were Ironman finishers! 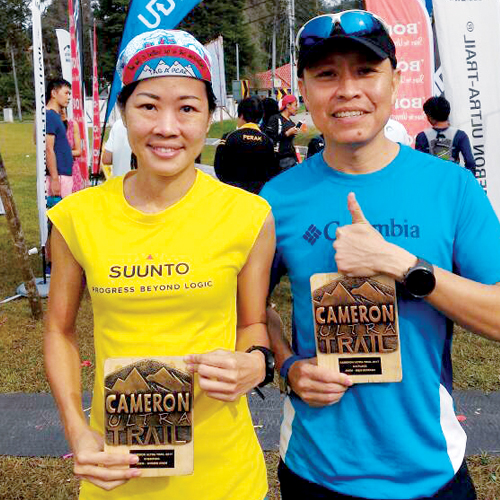 "Beet It Sport is a natural supplement that improved my time to exhaustion especially on my long run, marathon swim and half marathon race." 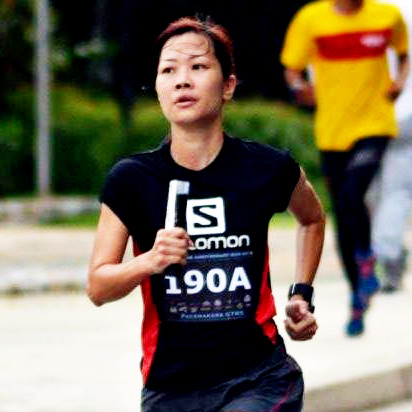 1. How did you get involved in trail running / triathlons?

Raymond: I used to play racket sports such as badminton and squash. I was never into running as I was a slow runner. My journey as a triathlete and trail runner began when I had a near death experience 13 years ago. I had brain aneurysm. Actually, reflecting on what happened then, I look at it as being fortunate. Well, why do I say that? Many think I’m mad as the experience is not welcomed by anyone. I see it as a blessing in life’s journey.

Due to poor limb coordination, I could not get back into racket sports. Instead, I took up walking just for exercise and to break some sweat. Walking turned into running. My uncle was my inspiration when I saw him running without much effort. I made up my mind that I wanted to run like him. From then on, I never looked back. I ran 5km, 10km runs, half marathons and full marathons.

Eventually, running wasn’t enough and cycling came into play. Duathlon followed. Since I was young, I’ve always admired triathletes. Swim, cycle, run. Another uncle who is a triathlete, is another one of my role models. I trained hard and finally, my dream came through, and I participated in my first IRONMAN in 2009.

After years of road running, trail running seems very appealing – it’s not just a hike through the mountains but running! That’s when my love for trail running started. It provides an alternative location to run and I do not need to run early in the morning or late in the afternoon. Being in a tropical jungle means running under green shades most of the time. Perfect!

Michelle: It all started from hiking, which is my weekly activity when I was 25 years old. It transformed me from a couch potato to a runner and triathlete. After years of being close to nature, I was determined to move out of my comfort zone and was planning to race in an Ironman event before I reached 30.

2. Do you have an athlete role model who inspired you?

3. What advice would you give to someone considering taking up trail running / triathlon?

Raymond: Learn step by step. Take one thing at a time. Don’t start with the longest distance.
Michelle: You don’t have to be good to start, start and eventually be good at it.

4. Running, cycling and swimming – which do you prefer and why?

Raymond: Running, especially trail running. No two steps are the same. It is where I bond with nature.
Michelle: Running is where I experience a runner’s high. It gives me a sense of freedom.

Raymond: Explore more trails. Share my experience and guide newbies.
Michelle: Get a PR for half marathon.

7. Tell us something that most people don’t know about you.

Raymond: I say my prayers and hum songs during long distance races.
Michelle: I have a habit of washing all my apparels and shoes immediately after running or swimming.

8. What are your top three sport nutrition tips?

9. What are your top three training tips?

10. How do you keep mentally focussed/strong during tough endurance events?

11. Can you give us an insight into your race strategy – nutrition fuelling, hydration management?

Raymond: A week before the race, I fuel up on a balanced diet. It’s important to store enough body glycogen for energy. I also build up my nitrates daily with Beet It Sport. On the race day itself, I eat 2 hours before flag off.

I carry along Beet It Sport shot for an ultra distance and energy gel for half marathon onwards. I also take an energy drink before a marathon / ultra marathon. Water, water, water – it’s very important to hydrate sufficiently! In races, especially long distance of more than 10km trail or in an ultra distance, I bring a hydration bag.

12. How did you hear about Beet It Sport?

Raymond: From the internet.
Michelle: As I’m a fan of drinking beet root juice as a pre-race nutrition, I was looking for bottled beet root juices which I can take along when I’m travelling overseas for long distance swimming races. I heard and read about Beet It Sport over the Internet.

13. Why do you use Beet It Sport and how has it helped you?

Raymond: It is scientifically proven and that’s something I can trust. My muscle endurance improved in long distance races.
Michelle: Beet It Sport is a natural supplement that improved my time to exhaustion especially on my long run, marathon swim and half marathon race.